I wrote tetrs (https://github.com/mkhan45/tetrs) over the summer after playing Tetris with some friends on https://jstris.jezevec10.com/. One of my goals when writing it was for it to be written mostly using functional programming. I did complete the actual Tetris part back then, but the UI was pretty bad so I never really used it. I finally got around to finishing it a few weeks ago because of coronabreak.

As usual, I wrote it in Rust using ggez as a game engine. 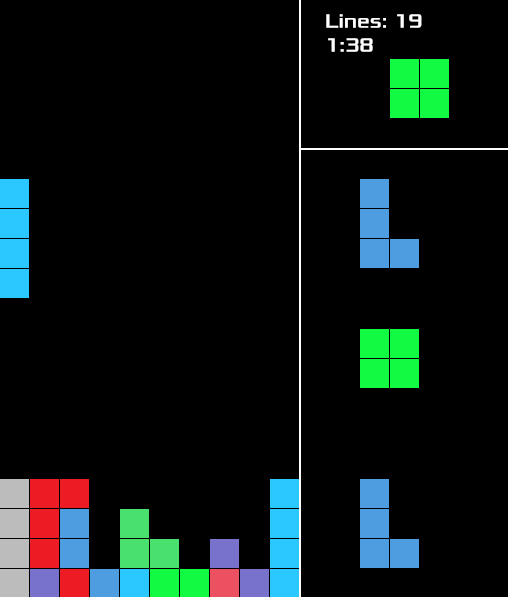 With these structs, collision is easily detected by checking if any of the squares in GameState have the same position tuple as any of the squares in current_block. Functional programming ideas help here. Block has a translate method. With normal OOP, you'd probably make the signature fn translate(&mut self, x, y), but to preserve immutability, I used fn translate(&self, x, y) -> Block.

This is helpful later on in this method in GameState:

I don't actually use try_translate on current_block because a lot more stuff has to happen if translated is not valid. Instead I did this:

Tetromino rotation was a lot less elegant. As far as I know, it must be hardcoded. The bulk of the logic is in Block::new(), which just specifies an array of squares for every combination of BlockType and Orientation. I managed to make it look okay though. Here's a snippet:

Of course, autoformatting is turned off for that function.

Rotation is also hardcoded because blocks have to be translated a bit on rotation to remain consistent. There's some standard way to rotate blocks that I followed.

Making the projection at the bottom was surprisingly difficult. It would be easy to just test every downward translation of the current block, but that would be pretty inefficient. Instead, I tried to find the max drop distance for each square in the block. At first I filtered it to only include the squares at the bottom of the tetromino, but there's only 4 anyway so that actually makes it slower.

This function finds the max distance that a tetromino can be translated down before hitting something:

Y_SQUARES + 5 is the max distance a square could be dropped from the time it was spawned.

Overall, I'm pretty happy with how it turned out. I was able to go back to it after six or so months and add a main menu and fix some bugs without too much difficulty, and I don't think there's too much inefficiency anywhere.